Cole Classic and Sun Run handed back to the community

2020 will see the dawn of a new era for the Cole Classic and Sun Run as the events move under the ownership of the Manly Life Saving Club and Northern Beaches Council respectively. After Fairfax was merged with the Nine group in late 2018 they swiftly looked to offload their events portfolio and gifted the events to ensure their continuation. Whilst the events will be operated independently the Council and Life Saving Club will be working closely together to ensure the standard of delivery is maintained whilst promoting a healthy and active lifestyle for their community and visitors.

How it all began

Graham Cole was a keen ocean swimmer, regularly swimming and body surfing at Bondi Beach. In 1981 he travelled to Hawaii with a team from the Tattersals Club to swim in the Waikiki Roughwater. He returned with a desire to establish a similar event in Sydney, reasoning that Australian beaches and strong beach culture were deserving of such an event and that it should be open to all members of the community who had done the necessary training. In 1982 Graham wrote;

The event is not a race but a challenge to all persons to stretch themselves in body and mind to swim a reasonable distance through surf. It will, I hope, be an incentive to persons to involve themselves in the self-discipline required to get fit; obtain confidence in their ability through swimming, to achieve a pride in having performed something that is, perhaps slightly above average, and finally to receive (in the form of an appropriately prepared Certificate or medal) some recognition of their accomplishment.

In 1983 the first Cole Classic was swum with 101 swimmers participating. 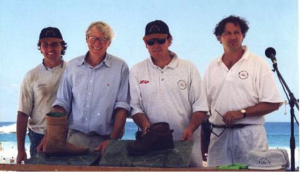 When did the Cole Classic move to Manly?

The Cole Classic moved to Manly in 2005. Manly LSC was the surf club where, as a young man, Graham Cole patrolled and was awarded his surf life saving bronze medallion.
The wonderful location at Manly Beach has allowed for the introduction of the 1km Novice Challenge to see the event truly flourish.

Why did the Cole Family do this?

A few reasons, it is a memory of their father, his legacy and the lifelong enjoyment he had swimming in the ocean. To think the Cole Classic is making a small contribution to the sporting and cultural fabric of Sydney, a city fortunate enough to be located on one of the great coastlines of the world.

In 2009, Manly’s popular Cole Classic event was managed by Fairfax Events for the first time.

After a quarter of a century, the Cole family decided that their event had outgrown the resources of family and friends. With nearly 3,000 entrants in 2008, the new partnership with Fairfax provided an increase of resources and skills to ensure an enduring event. The 2010 race again saw a record number with over 4,500 registered entrants. These entrants helped raise over $320,000 for charities across the country.

In 2011 Fairfax introduced the Sun Run. Aimed at promoting a weekend of health and activity the run began as a 7km event starting at Dee Why Beach following the picturesque coastline through Curl Curl, Freshwater and Queenscliff before finishing at the iconic Manly Beach. 6,444 participants took part in the inaugural year. 2014 saw the addition of a 10km distance and in 2018 an Aquathon (run-swim-run) was created. 2020 will see the 10th running of the Sun Run.

Christopher Cole, Cole Classic Founding Director, said: “The Cole family is excited by this new arrangement with Fairfax Media. We believe it will guarantee that the event can continue into the future, and can continue to raise much-needed funds for both the Manly Life Saving Club and the broader community”.

Manly Life Saving Club traces its history back to the early 1900’s. Following changes in 1902 to laws that allowed the public to bathe during daylight hours, 1903 saw volunteers saving the lives of people who would otherwise have drowned in the surf at Manly. In 1911, Manly Life Saving Club was given the charter of a lifesaving club. Since this time the members at Manly have gained more lifesaving awards than any other club in Australia. All active members update their surf skills and lifesaving knowledge annually.

Our members have officially saved over 10,000 lives, and can proudly state that no one has drowned at Manly while patrols have been on duty. As many rescues go unrecorded, the real number of lives saved would be several times larger. Currently, the Manly members save an average of 200 lives per year.

Whilst being a lifesaving club is a priority, Manly Life Saving Club has for some years devoted additional resources to youth education & development. The Manly Club has around 1,000 members who are between 6 and 18 years of age. They are taught surf, rescue and resuscitation skills appropriate to their age, and encouraged in a healthy lifestyle around a core of service to the whole community. These activities have seen numbers of young people in the club grow from 200 to over 1,000 in the last 25 years. The club also holds annual Drug & Alcohol seminars for its teenagers as part of their youth education activities, and keynote speakers include senior Police and other experts.

The Manly Life Saving Club has a proud record of supporting other charities and community service organisations outside of surf life saving, and is currently looking to redevelop their club building to allow further growth in its record of volunteer community service.

Stretching from Palm Beach to Manly, the Northern Beaches boasts more than half of all the beaches in Sydney and a population of more than 266,000.

Living on the Northern Beaches means checking surf conditions from the office and taking your children to the beach after school. It’s about busy sportsfields, bush walking and bike trails on the weekend. It’s an active lifestyle with clean waterways, beautiful wildlife and vibrant events backed by great services and infrastructure.

Northern Beaches Council is committed to delivering the highest quality service, valued and trusted by our community

Processing...
Thank you! Your subscription has been confirmed. You'll hear from us soon.